Laurel and Hardy, Batman and Robin, Bert and Ernie – certain pairs of people or things are just naturally better together, complementing one another. It’s the same way when pairing certain foods together to bring out the best in one another and to get a bigger nutritional punch. This is known as food synergy.

Food synergy has been studied over the years and has had a growing interest in looking at the relationship between certain foods. It is defined as nutrients in foods working together to create greater health effects. When pairing certain foods together at a meal or snack, they can do more for your health than by themselves or on their own.

“I’ve always been a big believer in the benefits of following a Mediterranean diet, which includes so many of the synergistic foods mentioned here,” said Dr. David Samadi, Chairman of urology and chief of robotic surgery at Lenox Hill Hospital in New York City. “The Mediterranean diet has long been celebrated as one of the healthiest diets in the world and is inspired by traditional dietary patterns of residents along the Mediterranean coast. The core aspects of the diet include nuts, whole grains, olive oil, fruits, vegetables, unrefined cereals, high consumption of legumes, moderate to high consumption of fish, moderate consumption of cheese and yogurt.”

Combining foods to achieve a synergistic effect, is a little like combining certain instruments together to create beautiful music. A flute by itself can certainly make a lovely sound but when you add in a cello, violin, clarinet and a French horn, the musical effect is so much more powerful and dynamic. Food synergy is also dynamic when nutrients between two foods work together in the body for maximum health benefits.

Here are examples of food pairings and why when paired together, they become a dynamic duo for your health:

A hot cup of green tea with lemon is one of the most dynamic duos around. Green tea is high in a type of flavonoid called catechins, which is associated with lower incidences of cancer, cardiovascular disease, high cholesterol and improves our immune system. When lemon juice is added, it increases the utilization of catechins found in green tea by more than five times giving a beneficial health boost.

Beans are an underused food that should be part of everyone’s regular diet. Red beans, like all beans, are loaded with protein, fiber, potassium, and magnesium. When beans are included in our diet, they can help prevent heart disease, colorectal cancer, hypertension and stabilize blood sugar levels.

Brown rice being a whole grain, is also high in fiber and magnesium. When the two are combined together, they form a complete protein, meaning it contains all nine of the essential amino acids.

Greek yogurt is a probiotic that thrives on prebiotics to feed it. Bananas contain a prebiotic called inulin, a plant-based carbohydrate. When bananas and the protein-rich Greek yogurt are combined together, the inulin increases the growth of yogurt’s healthy bacteria, helping regulate digestion and boosting immunity.

Tomatoes are well-known for their prostate-cancer fighting phytochemical called lycopene while broccoli is known for its abundance of vitamin C and the phytochemical beta-carotene. Combine the two together and prostate cancer has a formidable opponent. The bioactive compounds in both tomatoes and broccoli appear to have varying actions on anti-cancer pathways helping slow down the growth of cancer tumors. Lycopene is also known for lowering the risk of strokes.

Both oatmeal and blueberries can stand alone on their own for their exceptional nutritional profile. Oatmeal has an arsenal of phytochemicals to prevent free radicals that promote plaque buildup in the arteries increasing heart disease. Blueberries are loaded with vitamin C, fiber, and manganese along with containing ellagic acidwhich may prevent certain cancers. Combining the two together creates a powerhouse of health by further decreasing the risk of plaque buildup.

What an enticing combination! Choose dark chocolate with at least a 70% cacao content that is rich in catechins in order to be most effective. Apples contain an ample amount of a flavonoid called quercetin that has an anti-inflammatory effect protecting against heart disease and cancer. Combine the two together and they promote inhibition of platelets adhering to collagen.

Olive oil is a healthy monounsaturated fat that increases the body’s absorption of carotenoids, found in colorful vegetables such as tomatoes, spinach, broccoli, peppers, carrots, and kale. Carotenoids are health-promoting antioxidants that lower the risk of cancers, heart disease and have anti-inflammatory properties. These same vegetables also contain the fat-soluble vitamins of A, D, E, and K which are better absorbed when you cook them with olive oil.

Putting it all together

Certain foods eaten together are just naturally meant to be. Practicing food synergy works best when you choose food in its most natural form as possible and eat a wide variety of whole foods regularly. This is where you’ll see the best chance of reducing your risk chronic diseases while giving you the greatest health improvements.

Want the latest on food science?

Click here to download a sample chapter of Cheryl’s book, The Nourished Brain, and get a free printable meal-planning guide so you can start eating your way to a healthier brain today.

Cheryl Mussatto MS, RD, LD is a registered dietitian with a master’s degree in Dietetics and Nutrition from the University of Kansas and a bachelor’s degree in Dietetics and Institutional Management from Kansas State University. She is a clinical dietitian for Cotton O’Neil Clinics in Topeka and Osage City; an adjunct professor for Allen Community College, Burlingame, KS where she teaches Basic Nutrition; and is a freelance writer and blog contributor for Dr. David Samadi, Urologic Oncologist Expert and World Renowned Robotic Surgeon in New York City. Cheryl is also the author of The Nourished Brain, The Latest Science on Food’s Power for Protecting the Brain from Alzheimers and Dementia and The Prediabetes Action Plan and Cookbook, both available on Amazon in Kindle and paperback editions. 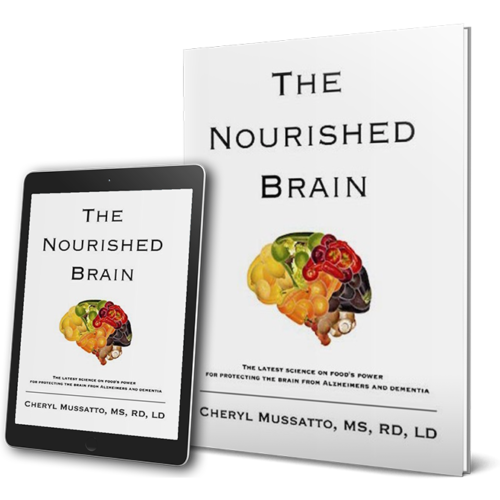 Get the Latest Science on Brain Nutrition

Download this printable PDF guide to start planning your way to a more nourished brain.

Meal-planning tips for a healthier brain

Subscribe to the Eat Well to Be Well newsletter to get 17 pages from The Nourished Brain absolutely free.

Plan your way to a healthier brain

Subscribe to the Eat Well to get this FREE meal-planning guide, along with weekly tips toward a healthier brain.